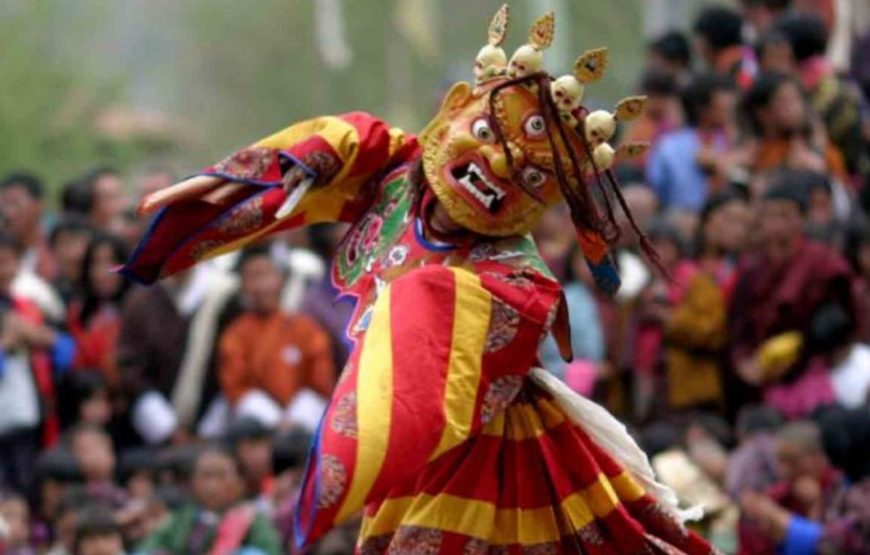 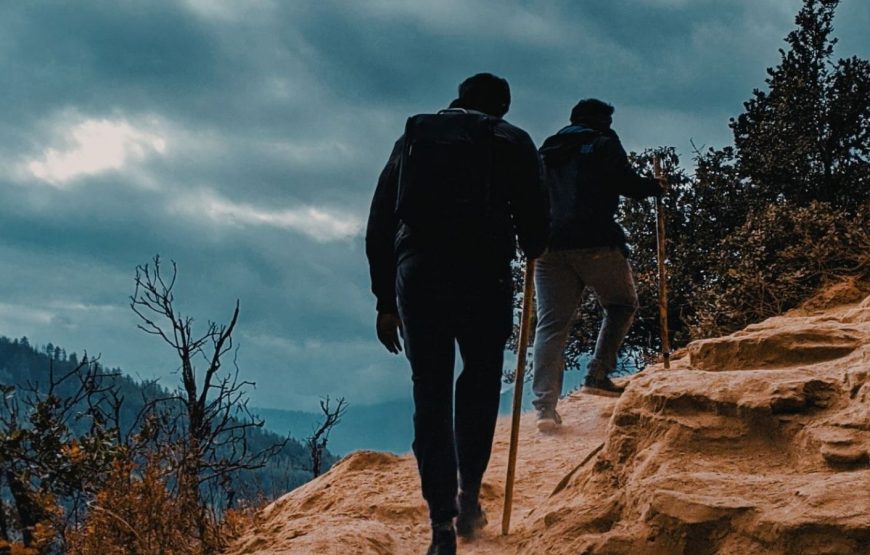 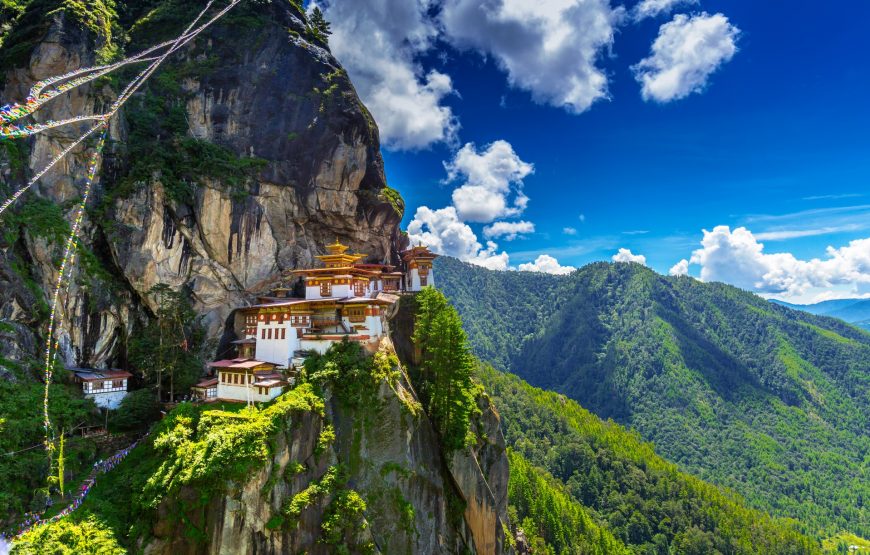 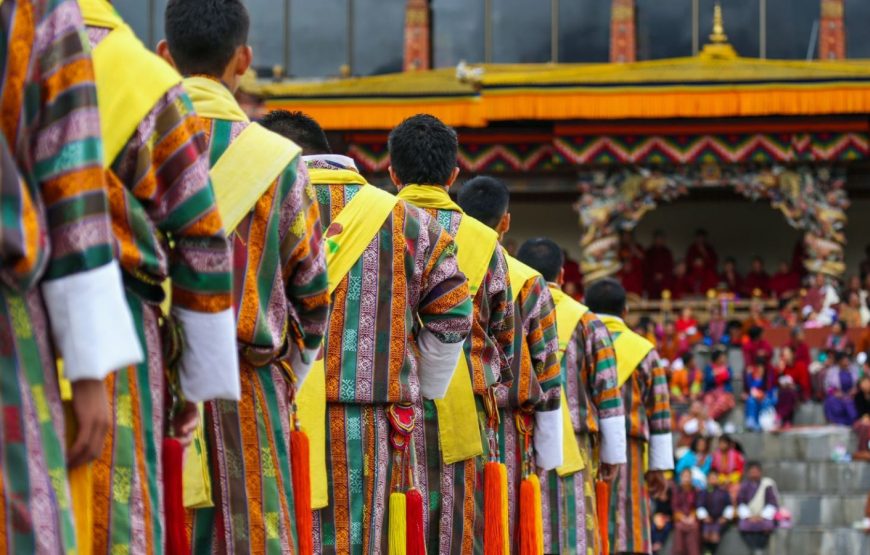 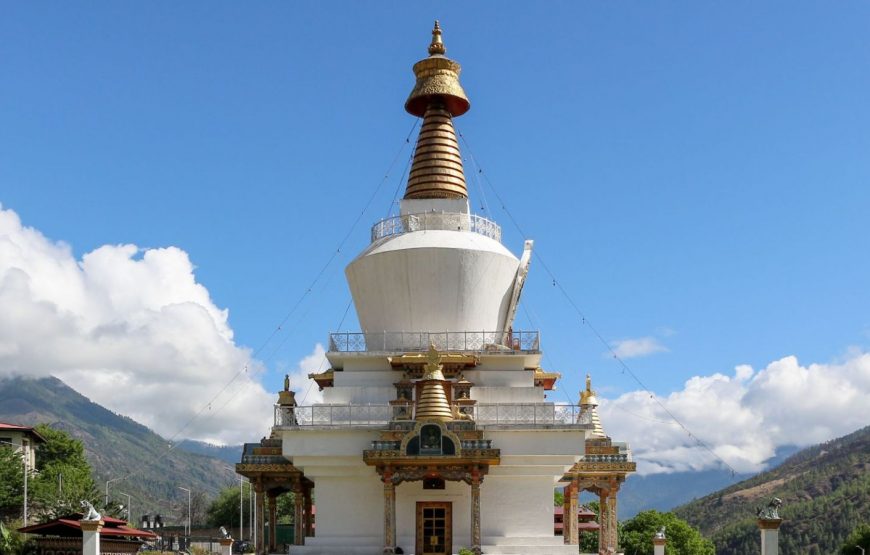 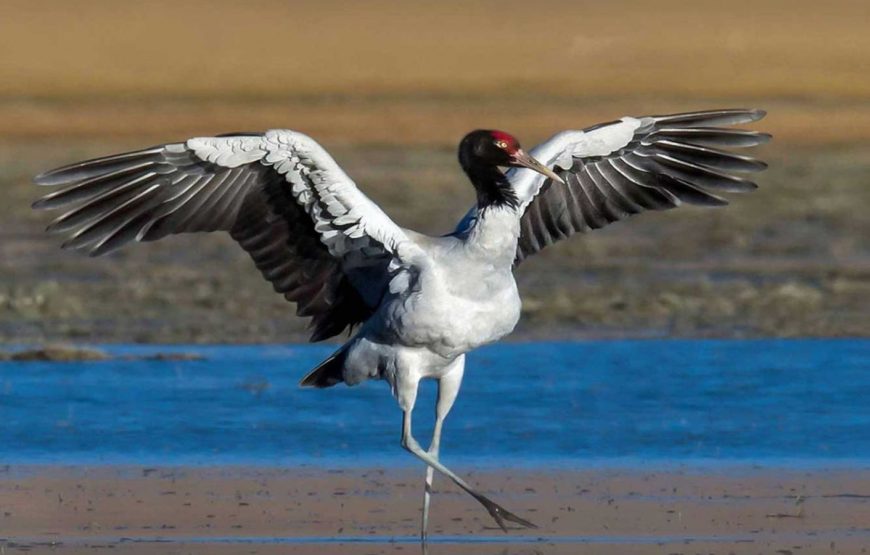 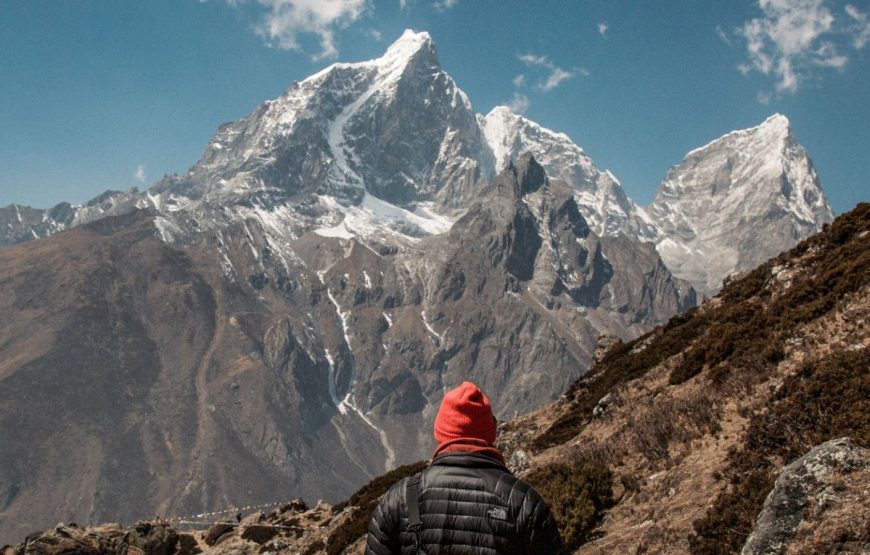 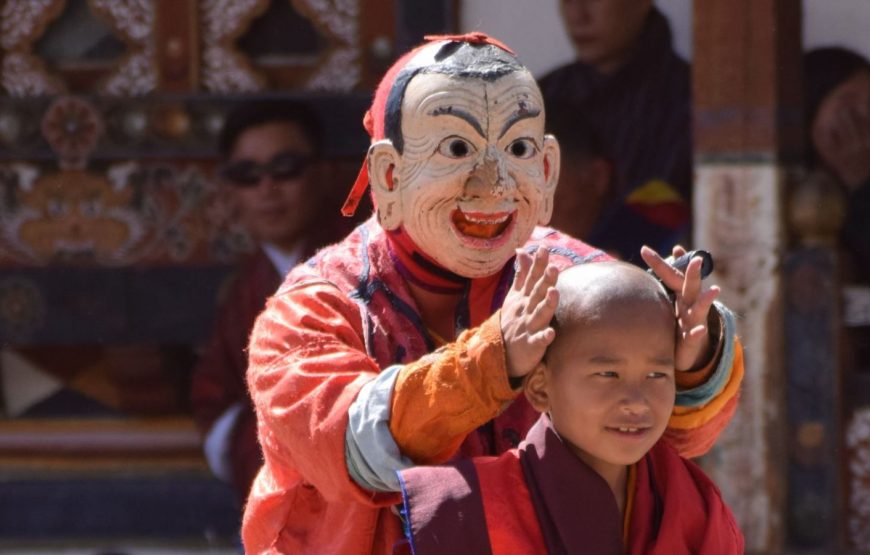 Dur Hot spring trek is one of the beautiful trek in Bhutan. It is the oldest route to Majestic Mt. Gangkar Puensum through several Hot spring where locals use to visit. This is 16 days Bhutan Trip combined with cultural tour. More

Dur Hot spring trek is one of the beautiful trek in Bhutan. It is the oldest route to Majestic Mt. Gangkar Puensum through several Hot spring where locals use to visit. This is 16 days Bhutan Trip combined with cultural tour.

While taking your flights to Bhutan from any airport donot foregt to get the printed Bhutan Visa before you board the plane to Bhutan. You will experience a bumpy ride to Bhutan followed by the view of Mighty Himalayas mountains. If you are taking flights from Delhi take the left side of the plane to views Mt. Everest, Kanchen junga and other Himalayan peaks including the sacred Jhomolhari and Mt. Jichu drakey in Bhutan. Upon arrival our representative will take you to Hotel. Sfter lunch visit Drugyel Dzong also called victory Dzong followed by 6th Century old Kyichu monastery. Overnight at hotel.

Drive the winding road northwest up the Pachu to the base camp of Tiger Nest Temple. Hike the most famous monastery which takes about 3 hours uphill hike through pinewood forest. The temple is secret for all Buddhist followers. After lunch visit Paro Dzong followed by wooden bridge filled with flutering prayer flags. Over night at Hotel.

Your Bhutan Trip from Paro to thimphu begins with visit to the Tamchog Monastery across the river followed by largest standing Bhudha Statue over looking Thimphu valley. The statue is 150feet tall built in 2006. Visit simply Bhutan museam where you get the opportunity to shoot the archery the national game of Bhutan. In this Bhutan Trip you also visit Fold heritage museam and 13 Arts and Craft School.

After lunch visit the memorial chhorten. Here the faithful circumambulate the shrine dedicated to the late King. Overnight in hotel.

After breakfast 45 minutes drive will take you to Dochula Pass. The pass is about 3100m above sea level. The pass is covered with 108 stupas to commemorate te victory over the insurgent in 2003. On a clear day you can see the panaromic view of the Himalayas and Gasa Dzong remotely located in the middle of the forest.

Punakha is the winter residence of Je Khenpo and old capital of Bhutan.

We start early today. After breakfast drive to Bumthang. On the way, stop a while to view Chime Lhakhang, which was built by Lama Drukpa Kuenley. He subdued the demons with his “ Magical Thunder bolt”. The Temple is also known as “the Temple of Fertility”. Enroute sightseeing in the valley of Wangdiphodrang, it includes: visit to Wangdiphodrang Dzong (from outside) built in 1638. Legend relates that as the people were searching for the site of the Dzong, four ravens were seen flying away in four directions. This was considered auspicious sign, representing the spread of religion to the four points of the compass. The Dzong is situated at the confluence of Mo Chu and Tang Chu rivers. Lunch at Trongsa. After lunch, visit Trongsa Dzong, the most impressive dzong in Bhutan, built in its present form in 1644 by Chogyal Minjur Tempa, the official who was sent by Shabdrung to unify eastern Bhutan and enlarged at the end of the 17th century by Desi Tenzin Rabgay. Trongsa Dzong is the ancestral home of the present Royal Family and first two hereditary kings ruled Bhutan from this Dzong. Then Visit Ta Dzong, an ancient watch tower. The chapel inside the Ta Dzong is said to be dedicated to the Trongsa Penlop Jigme Namgyal and drive to Bumthang. Over night in Hotel.

Bumthang is the historic district of Bhutan considering the many ancient monastery and secret site is considered. Bumthang Dzongkhag consists of four main valleys, Ura, Chumey, Tang and Choekhor. Choekhor is the largest of the four and is widely considered as 'Bumthang


Visit Jakar Dzong, which literally means “The Castle of White Bird”. The current structure was built in 1667 and is said to be the largest Dzong in Bhutan and then visit Lamey Goemba, a large palace and monastery built in 18th century by Dasho Phuntsho Wangdi. Visit Jambay Lhakhang said to have been built by King Srongsen Gampo of Tibet in the year 659 on the same day as Kichu Lhakhang in Paro. The temple was visited by Guru Rimpoche during his visit to Bumthang and was renovated by Sindhu Raja after Guru Rimpoche restored his life force. Under the temple is said to be a lake in which Guru Rimpoche hid several Terma. In October one of the most spectacular festival, “Jambay Lhakhang Drup” is staged here. After lunch, Visit Chakhar (Iron Castle) Lhakhang, it is the site of the palace of the Indian King, the Sindhu Raja who invited Guru Rimpoche to Bumthang. The Original palace was made of Iron and hence the name Chakhar. The saint Dorji Lingpa built the Current building in 14th century. Its correct name is Dechen Phodrang. We then visit Kurjey Lhakhang that is named after body print of Guru Rimpoche, built in 1652 by Minjur Tempa. Visit Tamshing Lhakhang (Temple of the good message), established in 1501 by Pema Lingpa and is the most important Nyingmapa temple in the kingdom.

(Distance 18 Km, about 6- 7 Hrs) After breakfast, the transport will reach you up to the trek point just below Kurje Lhakhang, one of the most renowned temples. The Trek route leads you along the Chamkhar Chu, a river known for its richness in Trout. The Trek trail for Bumthang to Gorsum is rather gradual. Over night in Camp.

Distance 12 Km, about 5 hrs. Alt. 3160 Meters. Today you will be walking through dense forests of Spruce, hemlock, Cypress, Juniper and Maples. The Trail is more or less muddy and ascends gradually till you reach to your campsite. Over night in Camp.

Distance 17 Km. About 7 hrs. Alt. 3400 m. The Trek from Tshochenchen is uphill till you reach the Julila Pass at about 3400 m. From here if the weather is clear, surrounding mountains can be viewed. After crossing the pass, the Trek trail descends till you reach the campsite. Musk deer, herds of Blue sheep and Himalayan Beers may be seen enroute. Over night in camp.

After a late breakfast, relax in the hot spring or hike in and around the camp. Over night in Camp.

Distance 17 km, about 7 hrs. Alt. 3100 M. The Trek trail from Dur Tsachu is uphill till Julila. After crossing the pass the trail descends till you reach the campsite. Over night in Camp.

Distance 17 km. about 9 hrs. Alt.3120 m. Today the trek begins early, as the trail is long. The trail drops gradually down for about 2 hrs till you reach campsite. Over night in Camp.

From Gorsum, descend down hill till you cross the Dur Village bridge then follow the new motor road till you meet up with transport. After lunch, Leisure time. Over night at the Lodge.

Take domestic flights from Bumthang to Paro. The flight is about 25 minutes and most scenic flights. Upon arrival our guide and driver will be there to receive you. If time permit we shall go to chelela day excursion the highest roadpoint. From here you can view the small haa district. Over night at Paro. 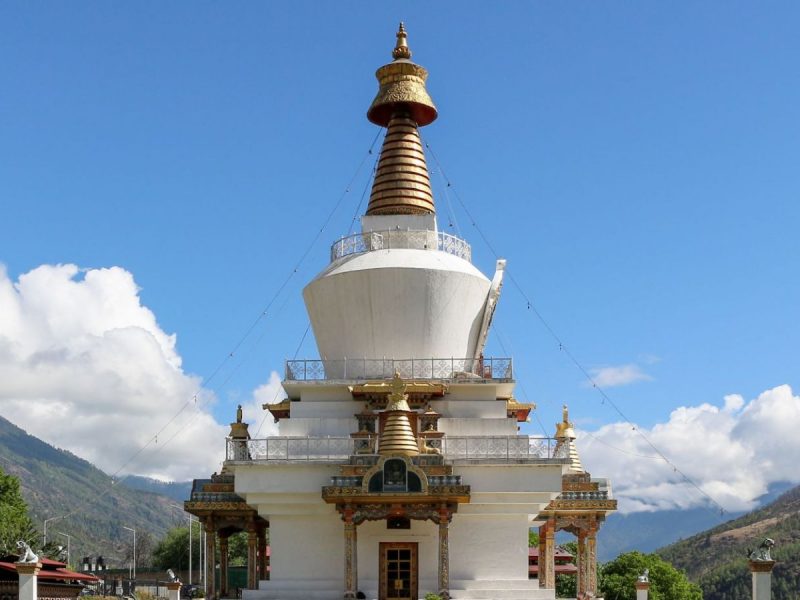 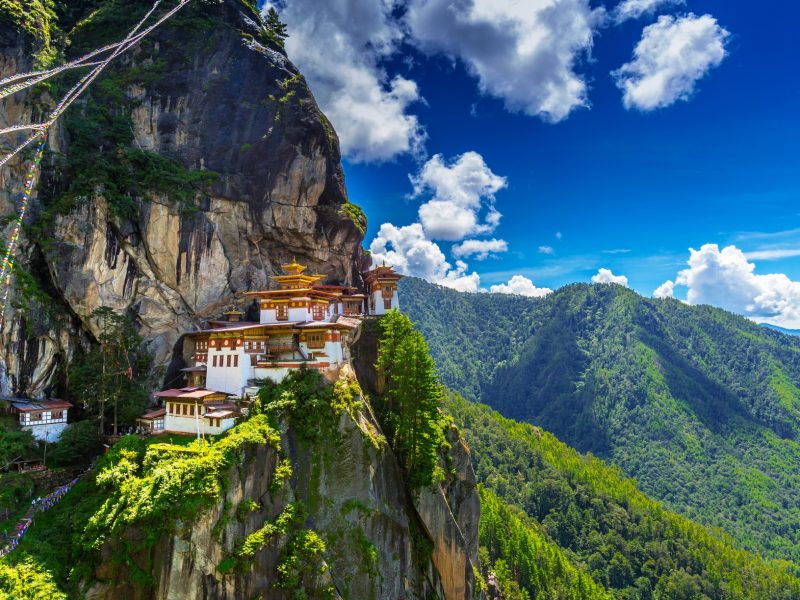 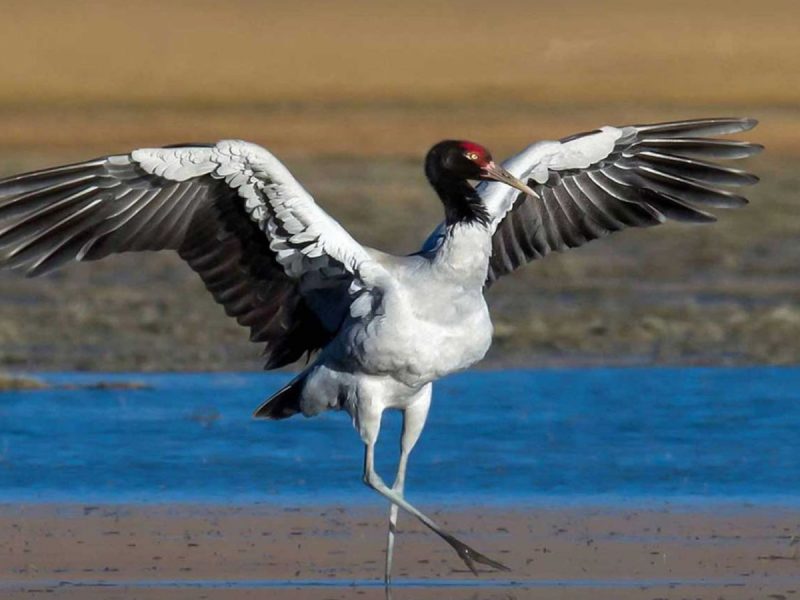 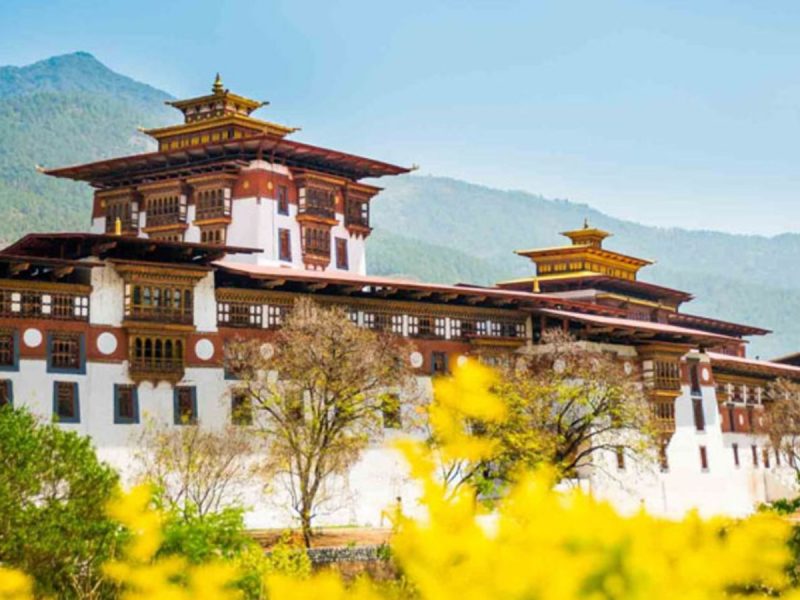 from $0,00
© 2021 Flights to Bhutan. All rights reserved. Developed by Bhutan Developer